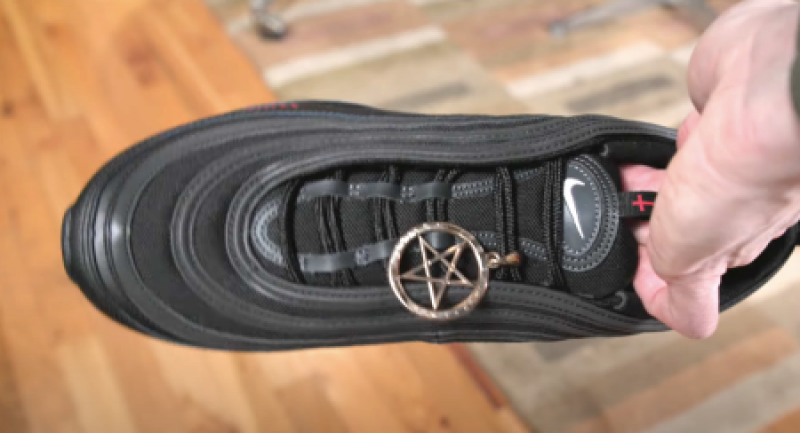 Nike filed the complaint against MSCHF on Monday in the U.S. District Court for the Eastern District of New York after the duo announced the release of their modified Nike Air Max 97s.

The shoes are all black and decorated with a pentagram pendant. They also reference the scripture "Luke 10:18" in red, which says: “And he said to them, ‘I saw Satan fall like lightning from heaven.’”

According to the website, which sells the sneakers for $1,018, the shoes also contain a drop of human blood in the sole of each pair. A total of 666 pairs are available, a number widely associated with the devil.

The 21-year-old openly gay rapper, whose real name is Montero Lamar Hill, was not named in the lawsuit.

"Nike filed a trademark infringement and dilution complaint against MSCHF today related to the Satan Shoes," Nike told Fox Business in a statement.

"We don't have further details to share on pending legal matters. However, we can tell you we do not have a relationship with Lil Nas X or MSCHF. The Satan Shoes were produced without Nike's approval or authorization, and Nike is in no way connected with this project.”

Nike claims that MSCHF buys the sneakers and then creatively modifies them before selling them at a higher price.

“Decisions about what products to put the ‘swoosh’ [logo] on belong to Nike, not to third parties like MSCHF,” the lawsuit states. “Nike requests that the court immediately and permanently stop MSCHF from fulfilling all orders for its unauthorized Satan Shoes.”

Nike also argues that the "unauthorized Satan Shoes are likely to cause confusion” and “create an erroneous association between MSCHF’s products and Nike."

"In fact, there is already evidence of significant confusion and dilution occurring in the marketplace, including calls to boycott Nike in response to the launch of MSCHF’s Satan Shoes based on the mistaken belief that Nike has authorized or approved this product," the court filing states.

Although Lil Nas X is not named as a defendant in the lawsuit, he took to social media following the lawsuit’s announcement.

He tweeted a meme of a homeless Squidward from "Spongebob Squarepants" begging for change.

The release of the Satan Shoes followed Lil Nas X's latest single, "Montero (Call Me By Your Name)." The music video for the song is loaded with demonic imagery.

In the video, the rapper descends on a stripper pole and vulgarly gives Satan a lap dance.

The song is reportedly about a guy he met last summer, which he may have compared to satan. However, the video ends with Lil Nas X snapping the devil’s neck and becoming Satan himself.

Immediately, the sneakers drew backlash from several Christian and conservative leaders and South Dakota Gov. Kristi Noem. Before filing the lawsuit, Nike assured the public that they are not affiliated with the product.

"We do not have a relationship with Little Nas X or MSCHF," Nike revealed in an initial statement share by NBC News. "Nike did not design or release these shoes and we do not endorse them."

The “Satan Shoes” and the music video were both released ahead of Palm Sunday.

The "Satan Shoes" line is a follow-up to the release of the company’s "Jesus Shoes," which reportedly contain holy water. The white shoes are marked with the phrase "MT. 14:25," which is a reference to Matthew 14:25. The Nike lawsuit does not mention the Jesus Shoes.

Do you have our App?